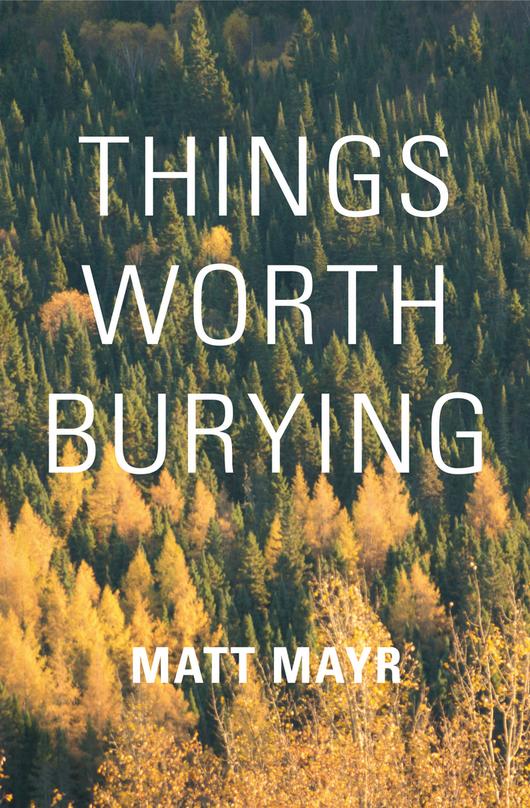 THINGS WORTH BURYING is one of 11 “best new reads in fiction” Spring 2020 according to The Globe and Mail.

Longlisted for The Miramichi Reader's 2020 "The Very Best!" Book Award

As a third-generation logger, a life in the bush is all Joe Adler has ever known. He works, he hunts; he provides. But when a man dies on his watch, and his wife abandons their young family for writing school in Toronto, Joe must face the consequences of his hard-living ways. Left alone to care for his seven-year-old daughter, he enlists the help of Jenny Lacroix, the wife of the man whose death he might be responsible for. Resentful and angry, and his conscience over Jenny’s husband far from clear, Joe threatens to spiral down the path of fury, booze, and violence that did his father in. What follows is a stunning tale of love and redemption, hatred and forgiveness, set amid the desolate cutovers, crystalline lakes, and rolling black spruce forests north of Lake Superior, and in a small logging town called Black River, once mighty and now derelict, in its final throes of existence.

Things Worth Burying is a novel set in a region that is rarely written about, the small resource-based communities that exist along the Trans-Canada Highway and its tributaries, from Sault Ste. Marie to Thunder Bay, the land north of Superior, a land of miners and loggers living a life in the bush, making ends meet, making do with the rise and fall of market economies that determine so much of their fate. Drawing upon his Northern Ontario upbringing, Matt Mayr brings us a single story pulled from a working-class people who in the face of disappearing jobs and shrinking populations make the difficult choice to stay because the land, the life, is in their blood.

THINGS WORTH BURYING is one of 11 “best new reads in fiction” Spring 2020 according toThe Globe and Mail.

“Matt Mayr perfectly captures small-town life [in his] powerful new novel…. Mayr, who grew up in Northern Ontario, perfectly captures the tone of small town life, of men who work in the bush, where, as Adler says, ‘Death … was measured in minutes and small errors.’ This is a world of friendly neighbours and vicious gossip, of mutual support and petty grudges, where the hotel bar is the only public place left to drink…” Robert J. Wiersema, The Toronto Star.

“Mayr captures well the beautiful solitude and melancholy of the bush that draws Joe… The secondary characters… appear well drawn and entrancing… The milieu is unswervingly authentic and will be readily familiar to anyone who’s ever spent time north of Sudbury. The ubiquity of lakes, forests, hunting rifles, heavy equipment, and alcohol combine into an ever-present sense of foreboding.” Stephen Knight, Quill & Quire

"Like Steinbeck's salt-of-the-earth migrant farmworkers, Mayr's characters are real, rough and shaped by tough times. ... His poignant descriptions, compelling plot and skillful character arcs draw the reader to the northern landscape and its people. Things Worth Burying is a novel worth reading and stands in sharp contrast to the current wave of urban angst-filled and often superficial narratives. It takes the reader to core meanings of community, family and overcoming generational failure in a way that is contemporary, impactful and enduring."-- Ottawa Review of Books

"...exceptional ... Things Worth Burying is a working-class story of life at the struggling-to-get-by level, of a man who loves his child, his work and his hometown. ... A gritty, yet heart-warming read. Recommended, and added to the 2020 longlist for Best Fiction for “The Very Best!” Book Awards." -- The Miramichi Reader

“Working-class story of hope and struggle… [Matt Mayr] writes sympathetically about his characters and wants us, the readers, to be sympathetic with their flaws and the daily challenges of small town life. His writing is clear, engaging, with generous and accurate details about the mechanics of working the bush. Those details ground his story in credibility and draw us into wanting to know what will happen as his plot thickens.”-- The Chronicle-Journal