"I really enjoyed reading Bad City and would definitely read more from the author. Bad City is very well written and has an excellent balance between action, story and characters. I loved how while the book is set in an 'after the fall' world, the focus remains very much on the characters and the story doesn't get caught up in it's own mythology. The book was surprisingly deep at times as it explored the nature of the authentic self vs what people were forced to do to survive. I highly recommend reading this book. It reminded me of old western movies at times with perhaps a dash of The Road. Can't wait to read what Mr Mayr puts out next." -- Amazon Reviewer

"Bad City is one of the best post apocalyptic books I have read. The fallen, gritty world is presented in great detail, revealing not only the fall of humanity back to the middle ages, but also the brutal nature of fallen people willing to do anything to survive. The book follows several characters, showing each in great depth as they struggle to survive, and in most cases, not caring who they step on in the process. And though dark, the book is also threaded with rays of hope, as two characters in particular seek to escape the horrific circumstances they have been trapped in." - Amazon Reviewer 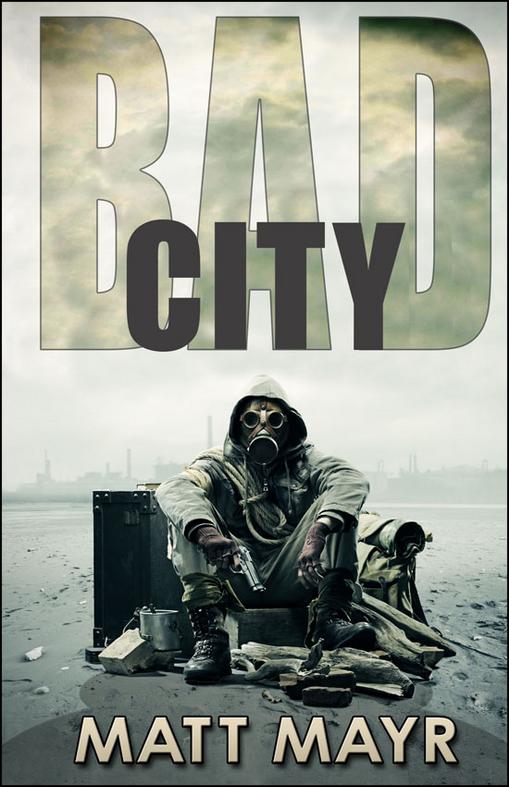 "Bad City is an excellent, and at times chilling and visceral novel that traces the lives of a number of different characters whose paths are inter-woven as they navigate a cynical, violent world where bad men rule and a few good people hope to salvage something for themselves. Mayr’s characters provide ample warnings and parallels which resonate in our own society without seeming “preachy” or overzealous. His characters have been forced to face the harsh realities of their surroundings and must survive and adapt accordingly. Furthermore, Bad City’s protagonist is a different kind of hero, more relatable and pragmatic, less macho and foolhardy. Bad City is a very well crafted, easy to read novel and Matt Mayr has demonstrated a profound ability to create depth and insight through plot, characters and symbolism. I look forward to reading more of his work!" -- Amazon Reviewer

"The author, Matt Mayr, describes a chaotic and violent futuristic world in his novel, Bad City. This well written story has strong characters, both good and evil, and grips the reader with their struggles for survival. I thoroughly enjoyed reading this novel, with its well developed and smooth flowing storyline, and look forward to reading more by this author." -- Amazon Reviewer

"Edgy, violent, wildly imaginative, surprisingly touching. There are ideas and scenes in Matt Mayr's Bad City that even the most jaded post-apocalyptic fan will find fresh, inventive, and utterly breathtaking." -- Craig Davidson, author of Cataract City

"Fans of the post-apocalyptic will appreciate Bad City's grim environment. Survivors of a decades-old catastrophe live in desperate conditions underneath tyrannical, but seemingly necessary cartel rule. Within this context a mission is undertaken that can either improve circumstances or further establish the existing structure. Mayr's debut offering is a tight narrative that contrasts moral ambiguity against the requirements of survival." -- Amazon Reviewer

"In Bad City, Matt Mayr captures with raw vividness what happens when the surfaces of civilization are peeled away, revealing a sheer will to survive that reduces humans to their ugliest essences. Brutal and grimy as Bad City’s post-apocalyptic, dystopian world is, though, there remain hints and tendrils of human longings and even tenderness -– slight sprigs of possibility. A remarkable portrait of a world gone very wrong, as chilling as prophecy." -- Joan Barfoot, award-winning author of Abra and Exit Lines

Dark, atmospheric, and gritty. The debut novel by Matt Mayr.

In the violent world of post-apocalyptic South Town, Eli Baxter is king, ruling from the thirteenth floor of his building while henchman do his bidding. Simon Gray, a talented young thief, now disillusioned with South Town, is desperate to escape with the woman he loves. As he plots their journey north, glimpses of his childhood in South India and Northern Ontario reveal the world as it once was, fueling his desire to break away. But when he's handed a new job, one that will make Eli untouchable, Simon realizes that escape - and transcendence to love and a peaceful way of life - might be harder than he thought.